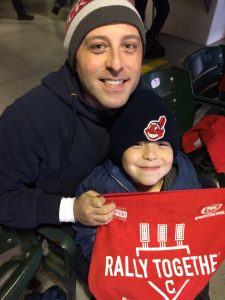 The Year of Cleveland has continued with the Tribe now in the World Series, and Alan and I took advantage by venturing to the Game 3 Watch Party at Progressive Field tonight!

Alan was thrilled to learn that he’d be able to see Progressive Field again after I had previously told him that the end of the regular season would be our last chance to see the ballpark together this season. But with the Tribe extending its season deep into October, the Dolans opening the ballpark for a watch party, Robbie getting us Club Level tickets, and Game 3 of the World Series falling on a Friday night, things set up perfectly for us.

I waited until Thursday night to give Alan the good news about our Friday plans, and he was excited for them all day on Friday. He loves that turning 6 meant that he’s permitted to go to night games. And he was thrilled to hear that we would meet Robbie and David at the ballpark!

We got downtown about 15 minutes before first pitch, snapped some photos on our walk, and headed into the ballpark.  We picked up rally towels at the gates, and then Alan picked out a World Series bear at the souvenir stand.

After leaving the team shop, we found Robbie and David on the Club Level and watched the game on the scoreboard from some great seats. To Alan’s delight, we had access to unlimited free soft pretzels — Alan’s favorite ballpark food!

It was quite significant that Alan sat and watched a few innings.  Even though he’s gone to a lot of games with me, usually he’s participating in the kids activities and not necessarily following the game.  Tonight, however, was geared for the adults (the Kids Clubhouse was closed), but that did not deter Alan from enjoying the night.

He loved waving his rally towel with the crowd, and happily took some photos with Robbie, David, and I.  Due to the late start time for the game, we could only stay  through about the 6th inning.  But fortunately Alan did get to watch the hot dog race — his favorite gameday experience outside of running the bases — from the Home Run Porch on our way out.

The fun did not stop there, though.  Alan [unexpectedly] stayed awake the whole car ride home and we listened to the Tribe grab a 1-0 lead on the radio. When we got home — with Alan still wide awake — we built with Tinker Toys while watching the last couple innings on TV.

Alan stayed up all the way through the last out of the 1-0 Tribe victory — which came on a Cody Allen strikeout and was followed by us exchanging high fives.  When we were sitting on the couch, Alan’s ears perked up each time he heard the announcer say “Cody Allen.” It was the first time he recognized an Indians player by name.  As Jill later pointed out (via text), between Cody Allen and Andrew Miller, Alan’s name is covered by the Tribe. 🙂

I’m not sure if any night can top watching the Cavs win Game 7 of the NBA Finals with Alan on Father’s Day, but tonight at least enters the discussion.  What a night! 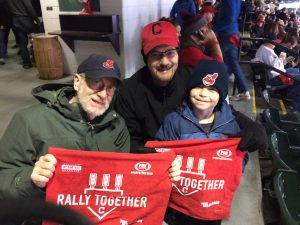 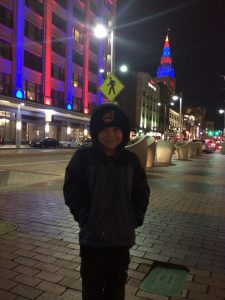 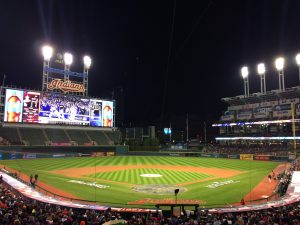 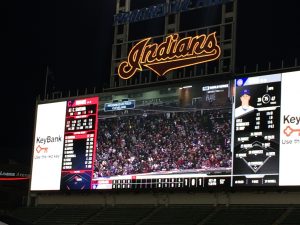 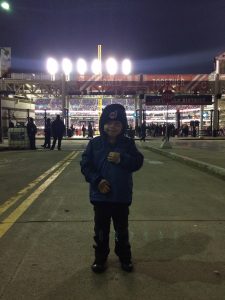 A few notes to add on this year’s World Series

-Alan and I watched the beginning of Game 6 together at home. Prior to first pitch, we took advantage of the 70+ degree weather and played catch and hit balls at the park.  Alan used his new metal bat. 🙂 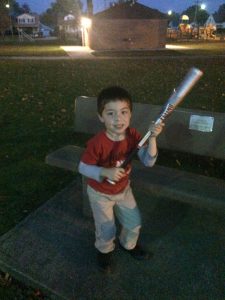