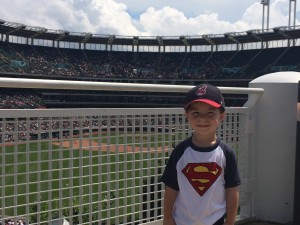 My little ballplayer returned to Progressive Field to run the bases again today!

As soon as we arrived at the ballpark, Alan asked to go down on the field.  It took some negotiating, but I was able to convince him to wait until after the game…

In the meantime, we bought an Indians car at the team shop, took some pictures from the centerfield bridge to the parking garage, and played at the Indians play area.  Then when Yan Gomes sent the Tribe home a winner on a homer in the 8th, Alan got to run on the field.

This was Alan’s best performance in three career outings running the bases.  He held my hand until he was midway between 2nd and 3rd, and then he took off by himself and sprinted for home! 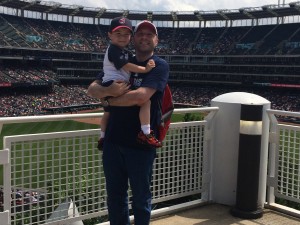 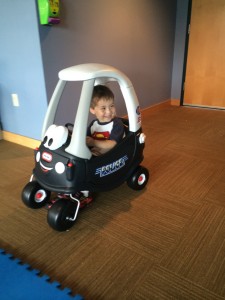 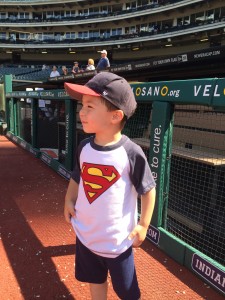 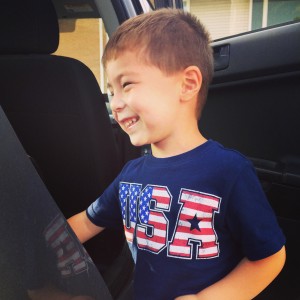 Alan wasn’t quite ready for fireworks this year, but that didn’t stop my little buddy from being patriotic and celebrating Independence Day.

He had a blast playing with cousins Mariah and Dominic at the pond behind Grandma Debbie’s house, where we went for a family barbeque on the 4th.  Very few things can get Alan as excited as he is when he’s playing with his cousins!

Earlier in the week, Alan also ventured to the zoo with me for my summer work outing.  Alan’s highlights of the day included roaring to try to wake up sleeping Tigers, watching kids feed leaves to Travis the Giraffe from up close, and observing sharks from just a few feet away through glass.  Alan also enjoyed running up and down the ramps outside the monkey exhibit, as well as running laps around the zebra observation platform.  Alan always manages to get his exercise in no matter where we are… 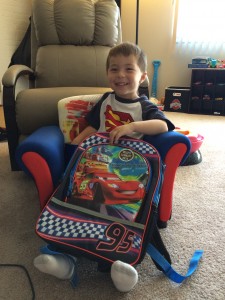 We’ve begun to prepare for school, including buying the necessary supplies.  Pictured above is the new Cars backpack that Alan picked out for himself!