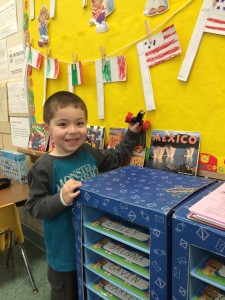 Today Alan got the first admissions acceptance letter of his life!  I’m happy to announce that this fall he will be attending the Preschool Peer Mentoring Program at Millridge Elementary School!  He interviewed at the school in January during the application process.  As part of the program, Alan will be paired with a hearing impaired student and serve as his/her learning partner.  So proud of him!