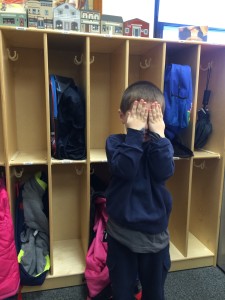 Since the last preschool update, Alan has continued to roll along at school.  In fact Mrs. Davisson even told me one day that he’s “really taking off” in the classroom!

Nowadays the class is divided into teams of four that are competing to finish daily assignments first.  Alan has really gotten into the spirit, and so have his teammates.  One of the daily tasks involves using scissors to cut out letters of the alphabet.  Alan likes to get to school early to be the first one to the cutting box, and after he’s done cutting, he encourages his teammates to cut their letters too.  Alan says the kids celebrate with high fives once they’re all finished. 🙂

In March some of the special learning units for the kids included classroom demonstrations on musical instruments, spring, and the history of Easter.  In April the class had an Easter party and learned about water, rain, fish, and flowers.

Alan’s artwork, including the umbrella pictured below, took on a spring theme as well.  The little guy, despite the silly picture he took in front of his cubby (above), doesn’t shy away from having fun at school! 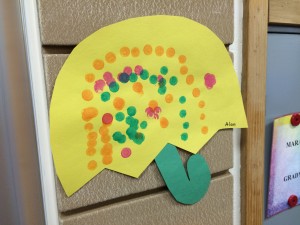 Alan, to me, while driving in the car tonight:

Alan:  “Then we should go to the one in Mayfield!”

If only we had Disney close by… 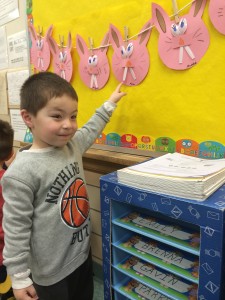 Alan’s showing off his Easter-themed artwork!… 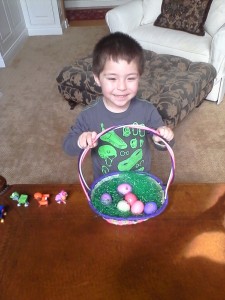 And the eggs he colored, just before his first Easter egg hunt with Daddy!