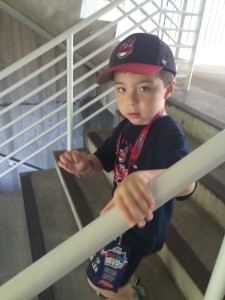 This week I decided to reach back out to Indians General Manager Chris Antonetti and we had the following email exchange.  He’s still a good guy:

Hello Chris,
My son Alan and I met you outside the ballpark on a non-gameday about three years ago when Alan was 2 years old.  I just wanted to write tonight to say hello and let you know that 5-year-old Alan is growing up to be quite the Indians fan.  Back then you gave us tickets for Alan’s first ballgame, and fast forward to now, he’s a Tribe Town MVP and we make sure to go to at least one Sunday home game per month.
Alan absolutely loves the new slide in the Kids Clubhouse and loves running the bases after the game.  I think it’s great what you and the front office have done for young Tribe fans.  I would have loved to have these experiences as a child, but I’m so glad to experience them with Alan now.  We sign up for playing catch on the field at every chance we get, so I’m joining in the fun as well.  Thank you so much for the opportunities that the Indians give families to create memories at the ballpark!
Attached is a photo that I took of Alan on the day we met you, as well as a photo that Alan and I took on Father’s Day this summer.  It’s now our tradition to go to a game every year on Father’s Day when the Tribe is in Cleveland.
Thanks again and Go Tribe!
Scott Miller

Hey Scott.  Thanks so much for the note and for sharing the photos.  Very cool to see them.  I’m thrilled to hear that you and Alan continue to create new memories and traditions to share around Tribe games.  Hopefully, I’ll bump into you at a game soon.  In the meantime, all the best and go Tribe.  Chris 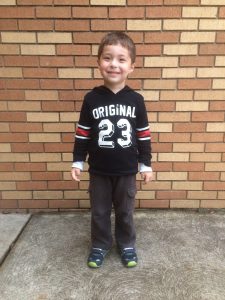