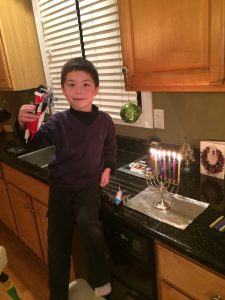 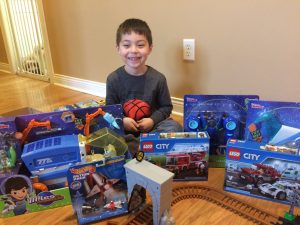 For Alan, this Christmas weekend was a characterized by cousins, friends, fun times, and a straight haul of Paw Patrol, Miles From Tomorrowland, and Lego toys! 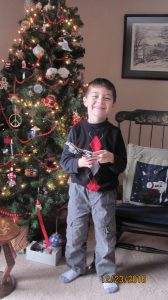 Alan started the day on Friday by making his annual visit to see Luke in Streetsboro, where Alan’s first gifts of the weekend were Legos and books!  But I think Alan enjoyed playing with Luke more so than receiving the Legos. 🙂

Later in the night, Alan had a sleepover at Grandma Debbie’s.  We tried out the new Paw Patrol table we got for doing homework and played Alan’s favorite game: “Go Fish!” 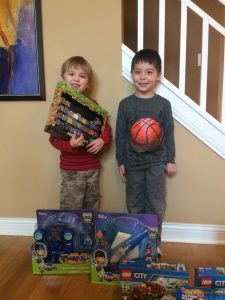 Alan and his cousins got together to open toys, chase each other around, and have a blast at the family party on Saturday.  Alan received all the toys pictured above thanks to his grandparents, Papa and Tata, and Robbie and Jill.  Included in the haul of toys was a Paw Patrol train set, various Miles from Tomorrowland vehicles, a Lego fire truck and police car, and an appropriately-timed John Glenn space shuttle toy from 1998 (one of Daddy’s favorites)!

Following the party, Alan went home and starting putting together his Legos.  He also made hot cocoa for Santa and put out carrots for the reindeer before going to sleep.  We kept the Christmas tree lights turned on so that Santa could find his way. 🙂 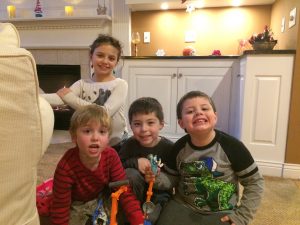 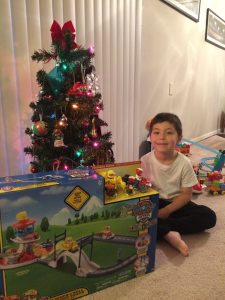 This morning Alan woke up to find that Santa gave him an Indians car and an Indians van (as written on his Christmas wishlist at school), as well as the Paw Patrol race track pictured above.  He got everything that he wanted from Santa!  After assembling the race track, we finished putting together the remaining Legos from yesterday.  Then it was off to open presents with his Mom!

There will certainly be a lot of new toys for Alan, Tyler, and Carleigh to play with at Grandma Debbie’s house in the weeks and months ahead! 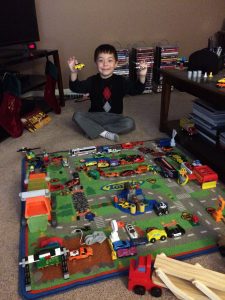 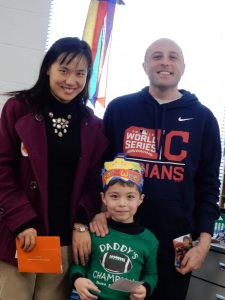 This week at school it was Alan’s turn to be the featured “Smartie” of the week!  As part of the fun, he got to wear a crown, be the boys line leader, and lead calendar activities all week.  He also got to present his “All About Me” poster (see 12/5/16 post) to the class and have his parents come in and read to the class!

We came in to school this afternoon and read two of Alan’s favorites: Hot Rod Hamster and Ten on the Sled.  Alan turned the pages while we read. He also called on students during the interactive portion of Hot Rod Hamster.  Afterwards I shared facts about Alan — including his love for baseball and the Indians — to the rest of the kids.

It was quite an exciting day overall for Alan, since the kids wore their pajamas to school and watched Polar Express together. At the end of the day, I was presented with another Christmas gift from Alan: the Rudolph artwork pictured below. 🙂 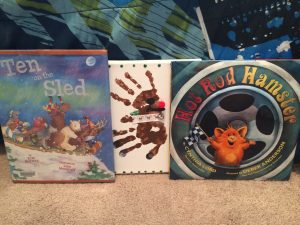 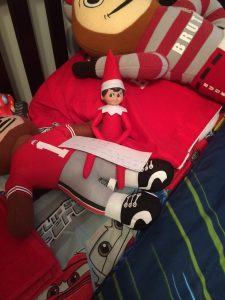 Guess who’s back?  It’s Elfie!  And he’s got a message from Alan to deliver to Santa tonight!  This year Alan would like an Indians van and a Paw Patrol train set from Santa.  Alan also wanted to let Santa know that he’s going to make coffee for him and leave out some carrots for his reindeer on Christmas Eve. 🙂 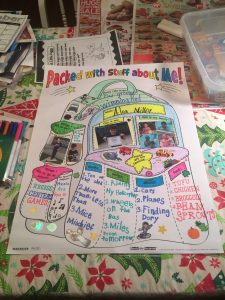 Alan is all ready to be the “Smartie” of the week two weeks from now. 🙂

As of today, Alan has officially taken up ice skating!  He participated in his first of five “learn-to-ice-skate” sessions at Gilmour Academy.  He took a bus with his friends from Millridge after school, and he had a great time learning to skate! 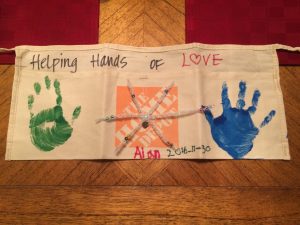 Alan’s winter workshop gifts for me (tool belt) and Grandma Debbie (ornament) were much appreciated. Thanks Alan!