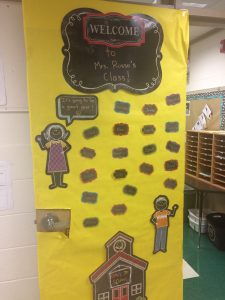 Tonight at parent orientation I learned about all the fun that’s in store for Alan in Mrs. Russo’s first grade class this school year!  I also got to see Alan’s desk (it’s very neat) and some of his work that was hanging in the hallway outside the classroom. 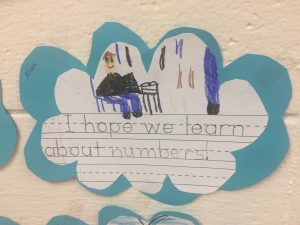 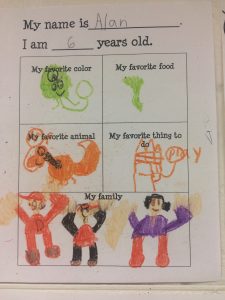 He also left a note for his Mom and I to find tucked away in his desk.  Look at that beautiful handwriting! I enjoyed writing a note for him to find tomorrow as well.  🙂 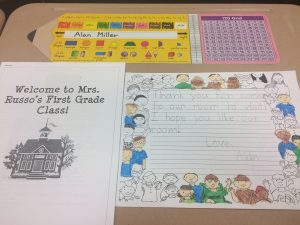 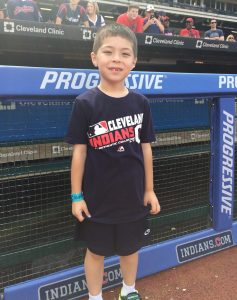 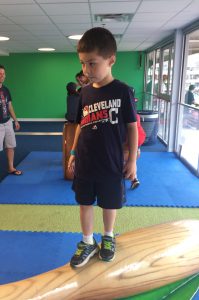 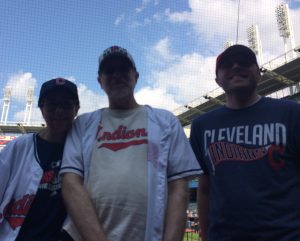 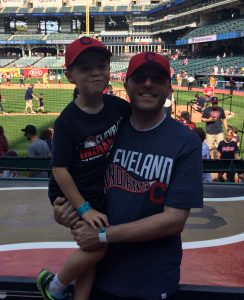 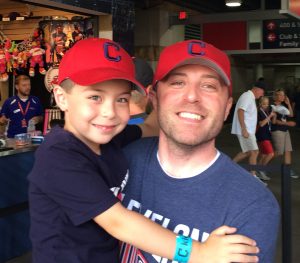 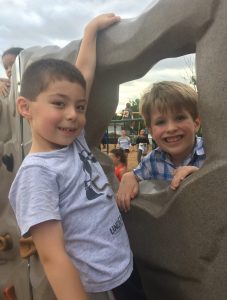 This evening Alan and I headed to the annual ice cream social at Millridge.  The social — the unofficial kick-off to the school year — has become one of our favorite annual events.  Alan got to enjoy another orange popsicle while spending a lot of quality time on the playground!

Alan spent the most time with Brady (pictured above) on the swings, slide, and rock climbing wall.  He also saw Kindergarten friends Brooklyn, Tony, Noah, Piper, and Colin, as well as new classmate De’Onta.

Pretty soon it’ll be time for open house and Donuts with Dad!  We know what to look forward to now as Millridge veterans. 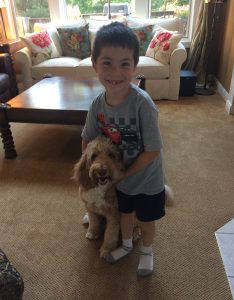 Alan and Lulu sharing a hug. 🙂 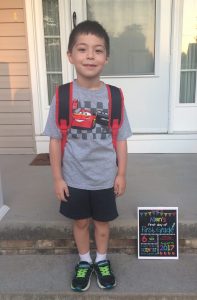 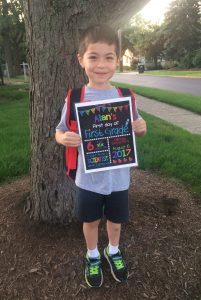 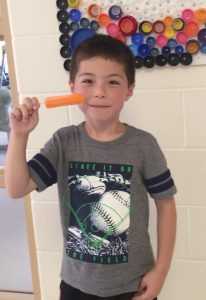 Today Alan got ready for 1st grade at “Popsicles with the Principal.” This new event involved students coming into the building on the final day of summer vacation to check out their classrooms and drop off school supplies at their desks.  And of course the Principal was on hand to pass out popsicles to the kids!

As part of one final summer adventure, Alan went on a “Disney Dream” Cruise to the Bahamas with his Mom and Grandma Wa-boo from August 11th – 14th.  Alan told me his favorite parts were “Pirate Night” on the cruise, swimming in the ship’s pool — including going down the water slide — and the carriage ride at the Bahamas.  He said there was mini-golf, too, and he got another hole-in-one! 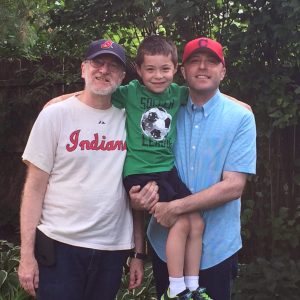 This weekend Alan and I traveled to Chicago for our annual trip.  Below are the highlights.

Alan and I flew together for the first time, arriving at O’Hare airport a little after 9:00pm CST on Friday night.  After a quick stop at Target for Alan’s food (and a Peppa Pig train that somehow got in the shopping cart), we arrived at the house.  Alan’s first request was to bring out the Lincoln Logs – a favorite from our last trip! 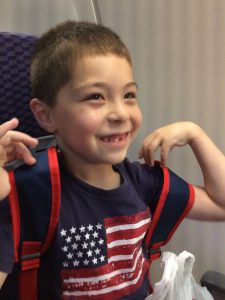 As soon as Alan woke up on Saturday, he got to work building with the Lincoln Logs.  Together with Robbie, he built the barn and pig-sty pictured below.  Tragically, though, the pig sty was destroyed by a tornado shortly after this photo was taken. 😉 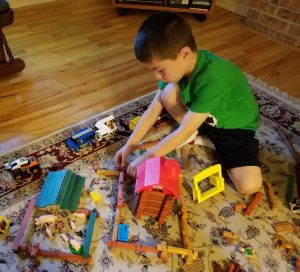 Afterwards we headed to the Chicago Botantic Garden to see the train display.  Alan waited all year to see his favorite model trains again, and he was in train heaven once he arrived.  He told me his favorite train this time was the passenger train (shown below).  However, he certainly got a kick out of the engine that got separated from the rest of its cars too. 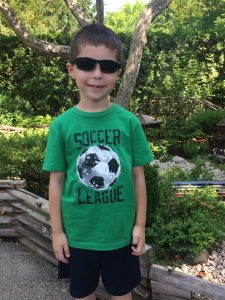 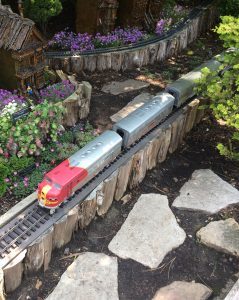 When we went looking for the butterfly train car – a favorite from last year – we were surprised to find a lady bug train car in its place.  We later learned that the butterfly car rotates with both a lady bug car and a caterpillar car!  Alan requested that we see the other two that were in storage.  He ultimately kept the butterfly at the top of his rankings. 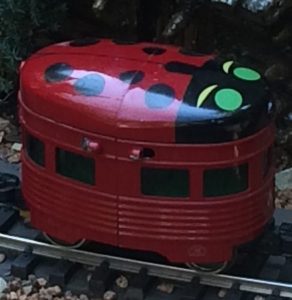 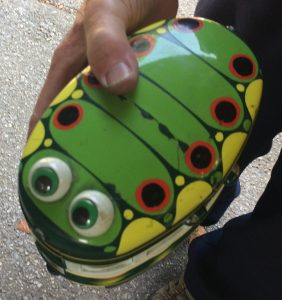 Following the Garden, we headed to the Deerfield Public Library, where Alan played with more trains!  He also checked out a book on transportation-related songs and poems and bought two other books involving transportation. 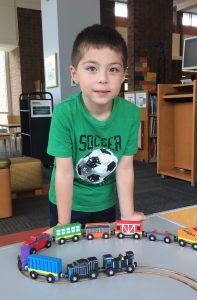 After lunch at Rhapsody Café, it was on to mini-golf at Highland Park with Robbie. Alan started off on fire — scoring 2’s four times on the front nine!  He led me by 1 stroke after nine (while trailing Robbie by just 1) and was hanging in through twelve holes, but then requested that we stop keeping score for the rest of the day.

At the conclusion of golf, Alan called a ‘do-again’ of sorts.  He had so much fun in the morning that he requested a second visit to the Garden (our tickets were good for the whole day) and a second round of mini-golf.  We obliged, and Alan got to experience the fun all over again!

In our second round of golf – this time with Jill as the third player – Alan drained his second career hole-in-one!  One thing is for sure: when golfing in Chicago, Alan will hit at least one perfect shot.  So I asked him to pose for his customary hole-in-one photo again. 🙂 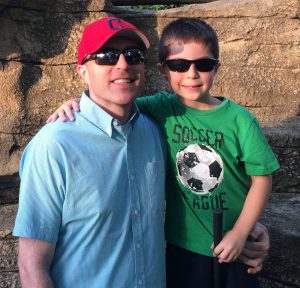 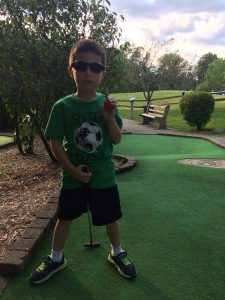 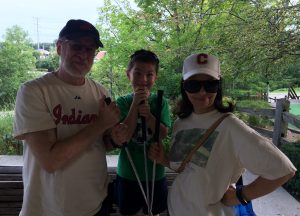 During the evening we also took our annual photo at the famous backyard tree (see photo at beginning of post).

Sunday started with a real train ride for Alan!  He rode with Jill from Deerfield to North Glenview.  Alan requested riding on the 2nd level of the 2nd car.  That was important to him after riding on the 1st level last year.  He loved the ride, of course.

We returned home by mid-morning and Alan continued building with Lincoln Logs.  This time he and Jill built one house, one barn, and two garages.  Then he played Monopoly Junior for the first time with Jill.  They played with modified rules, but it was a great first exposure to the game for Alan. 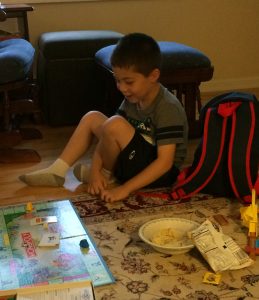 Then it was off to lunch at the Deerfield Square.  After our outdoor lunch, Alan called for a second visit to the Deerfield Public Library.  There, Alan played with his trains, as well as the word game pictured below. 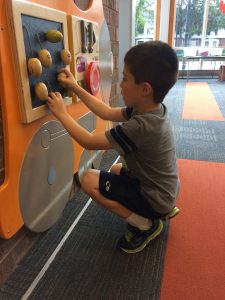 Afterwards, Alan and I unfortunately had to catch our 4:30PM CST flight home.  But not before we snapped the photo below at O’Hare.  While waiting in line for the plane, Alan made a friend named Ashlyn.  She had her Lady (from Lady and the Tramp) stuffed animal chase the Lightning McQueen car that Alan had just purchased, to the delight of several onlookers. 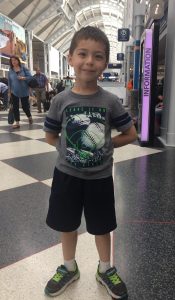 Thanks to Robbie and Jill for hosting us for another fantastic weekend.  Alan’s already looking forward to returning next Memorial Day! 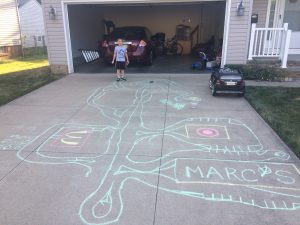 Alan’s latest masterpiece: a drawing of Mayfield.  In the top center of the photo, he captured the 271-422-480 intersection quite well.