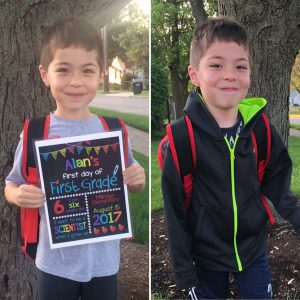 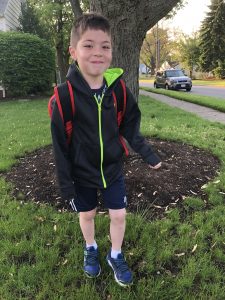 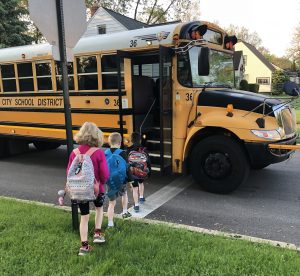 At school, the kids had an all-grades awards assembly in the morning.  Alan received the “WOW” (What an Oustanding Worker) award for his class, which went to the student that “best demonstrates a positive work ethic in the classroom and always gives 110%.”  Alan’s name was called during the assembly and he came to the front of the gym.  There he took a photo with the other first grade recipients. 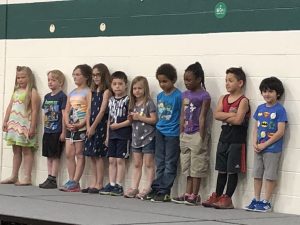 From 11am-12, the school had an outdoor picnic for the kids featuring hot dogs and chips.  Parents were invited, so I was there too.  Alan ate his lunch with me on the playground equipment that he named the “speed rover” (shown in the Spring Book Fair post).  De’Onta, Ella, and Brooklyn later came over to join us. 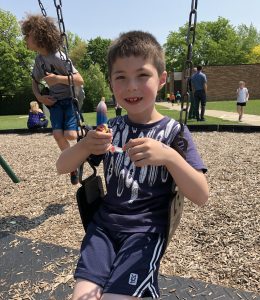 When Alan was eating a popsicle on the swings, Ella — who has tended to make her way into my photos of Alan this year — invited Alan to play with her.  Alan described it as “nice, but also annoying” that she wanted to play with Alan the whole time and didn’t take ‘no’ for an answer. 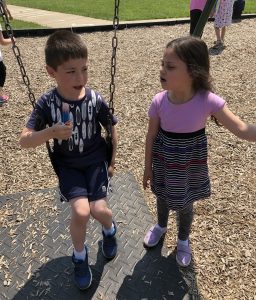 After the picnic I went home, but then met Alan at the bus stop.  I waited for him while he finished building the Lego fire station that he bought with a $140 piano scholarship that he just received at the Music Settlement. 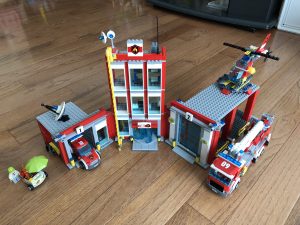 Then we hung out at McDonald’s and talked about his last day of school.  He told me about the 5th grade “clap out” ceremony and commented that it’s always a little sad when school ends.  He’d probably be fine going to school year-round if that was possible. 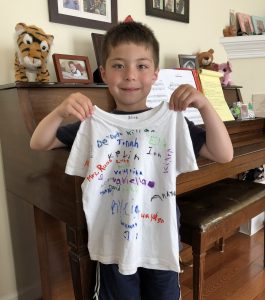 Monday was “Walk Day.”  Alan and his class walked laps around the outside of the school.

Tuesday was “eXchange Autographs Day.”  Alan’s class brought in white shirts and the kids took turns signing them for each other (pictured above).

Other notes about Tuesday:  In the morning, the first graders had their field day outside (despite the AM rain).  Then in the afternoon, the kids visited each of the second grade classrooms to prepare for next school year.

Wednesday was “Year-End Clean Up Day.”  Alan packed up his desk belongings and took home a heavy backpack.  He wore his baseball shirt to class, which he was very proud of.

Thursday was “Zip Up and Zoom Home Day.”  It was an eventful Last Day of 1st Grade!  Alan brought home the last remaining item from his desk – his pencil box.  He loves his pencils (all themes and colors), so I bought him an electric pencil sharpener for home use this summer and beyond.