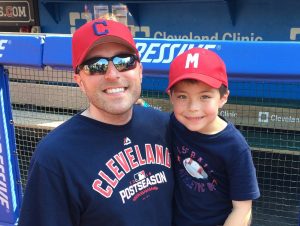 Today Alan and I kicked off the summer season of Sunday afternoon Indians games.  We came straight from Alan’s baseball practice, so we didn’t arrive until midway through the game.  Alan had only enough time for his favorite activities, which he decided were batting and sprinting. 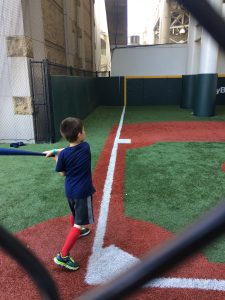 We did stop inside the Kids Clubhouse for the quick photo opp below (Alan’s idea), two trips down the slide, and popcorn — which seems to have replaced the soft pretzel as Alan’s go-to ballpark food item. 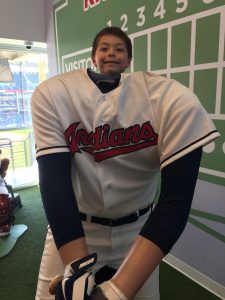 Before long it was time to run the bases!  Alan also took the photo below outside the Indians dugout. 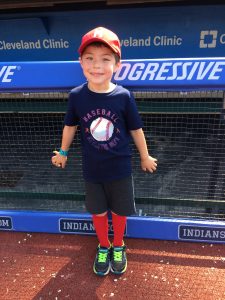 In addition to getting our fill of baseball on this hot, sunny day, we also turned our attention to the Cavaliers.  Both before and after the game we stopped for a few pictures with the NBA Finals signage.  Go Cavaliers! 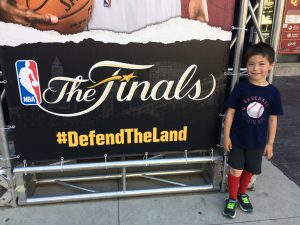 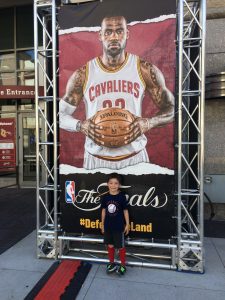 Note 1: Upon our arrival at the ballpark, we were greeted by a 443-foot foul ball off the bat of Encarnacion that landed about 15 feet from us outside the left field gate.  We watched it sail overhead and land outside the ballpark.

Note 2: The NBA Finals games have been on too late for Alan to watch, but he’s aware the Cavs have reached the championship round once again.  During the Eastern Conference Finals, Alan did watch the Game 2 massacre in Boston with me when the Cavs won 130-86 over the Celtics on May 19th.