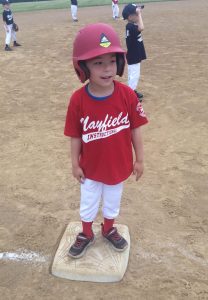 Alan has wrapped-up his rookie year in the Mayfield Boys’ Baseball League.  Here’s a recap of the second half of the season:

6/9 – Alan goes 3-for-3 and plays 3B and P.  He makes his mark fielding from the pitcher position, and is established as a regular there – a prime fielding position for this league.

6/16 – Alan goes 3-for-3 and plays 2B and P.  After the game, Alan discovers that I’m the one who has been bringing the marker board for the lineup to each game.  He proceeds to borrow it and write notes — including his own version of the team’s batting order. 🙂

6/30 – Alan goes 1-for-1 and plays 2B before the rain comes and postpones the game after one inning played.  Alan finishes the season batting 1.000!

It was a great debut season for Alan in MBBL play.  I loved coaching third, managing the lineup for the kids, and standing in the field with Alan.  Next summer Alan will move up to the league for 7 & 8 year-olds.  He’s ready! 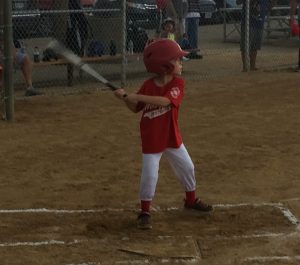