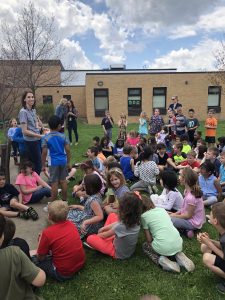 Tuesday was “Icy Treat Day.”  It was a nice weather day, so Alan ate an orange popsicle (his favorite flavor) outside with his class while writing in his journal.  He said he wrote about his favorite recess activities.

Wednesday was “Jammie Day.”  Alan wore his Brutus Buckeye pants and a shirt with a motorcycle on it.

Thursday was “Kindness Day.”  Alan said his class did something special for the teachers at school.  He said that included making crowns for them.

Friday was “Laughter & Lemonade Day.”  It was another nice weather day, so the first grade classes went back outside (pictured above).  Alan said he tried lemonade, and he told the following clever joke to his friends:

Q:  Why did the cookie go to the doctor?

A:  Because he felt crumby!