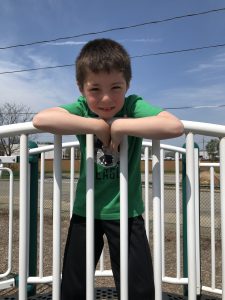 This weekend was the first weekend of spring with warm weather and no rain, and Alan took full advantage.  He practiced hitting at the community park on Friday night and Sunday afternoon, with a Saturday morning team practice mixed in between.  After practicing hitting, Alan played at the nearby playground – one of this favorites – each time.

Also, on Saturday night, Alan played outside by Grandma Debbie’s pond with Tyler and Carleigh.  Alan’s favorite part was throwing rocks into the pond.  Alan found it funny when one of Tyler’s throws didn’t go far enough and splashed them both with mud.

It won’t be long until Alan will get to play outside every weekend!