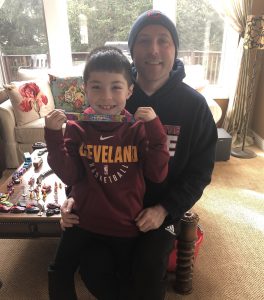 Alan gave me a birthday slap bracelet to wear today and I rocked it like it was 1991!  Alan actually got it for his 8th birthday at school from Mrs. Harris and wore it on his birthday.  So naturally, I wore it on mine (and I’ll be wearing it to work tomorrow).

Alan also gave me a card that featured a drawing of a gray plane that was flying a scarlet banner that said “Dad.”  And he gave me a bag of Hershey kisses that he snuck into my car as a surprise early present last night.

Today we spent the morning skiing at Alpine (just for fun; no lessons) and the afternoon playing at Zero Gravity for Joshua’s party — where I had plenty of birthday cake.  Second year in a row I got cake on my birthday by taking Alan to a party! 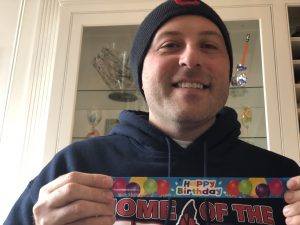