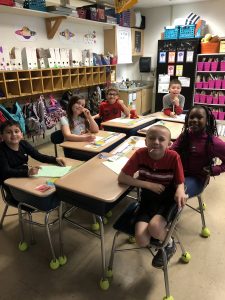 Monday was “Interesting Fact Day.”  Alan told the class that China has the most people of any country in the world (1.3 billion).  We had researched facts about China the night before and Alan liked this fact the best.

Tuesday was “Joke Day & Kick off your Shoes Day.”  Alan came prepared with the following joke, which he picked from a book of jokes we have at home (purchased last fall when I put notes with jokes on them in Alan’s lunch bag).  He also didn’t have to wear shoes in the classroom.

Q:  Where do elephants pack their vacation clothes?

A:  In their trunks.

Wednesday was “Letter and Lollipop Day.”  Alan enjoyed a cotton-candy-and-bubble-gum-flavored lollipop while writing a letter to a first grader about what to expect in second grade (pictured above).  Before school on Wednesday, Alan also got to enjoy “Muffins with Mom.”

Friday was “Outside of the Classroom and Popsicle Day.”  Alan’s class actually had popsicles on Thursday because Mrs. Harris was out on Friday.  The class did still go ‘outside the classroom’ on Friday to watch the Annual Millridge Talent Show.  Alan shared that he’d like to enter the competition next year, which is for third, fourth, and fifth grade students.