A behind the scenes look at Alan’s MLB debut:

The day was made possible by Robbie and Jill winning an auction that allowed Alan to be in the Kids Starting Lineup.  We found out the great news on April 17th.  Alan was thrilled when I told him over the phone that day.  I can still hear the happy sound in his voice while saying “Whaat!?” when I told him the Indians need him on the field before the game. 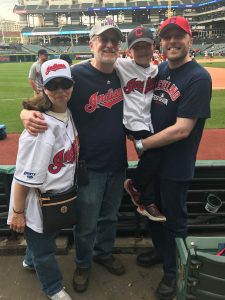 On April 19th Alan created artwork which depicts his family driving to Progressive Field to see him on the field.  In the drawing, there’s a Hyundai (Daddy), Honda (Robbie and Jill), and Mercedes (Grandma Debbie and Papa) clearly marked on Alan’s highway. 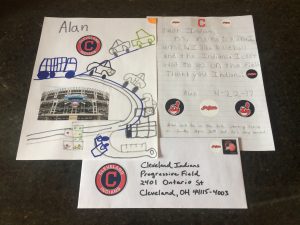 On April 22nd Alan wrote a thank you note to Robbie and Jill and a separate letter to the Indians (pictured above), which we mailed to Progressive Field that day.  Also on the 22nd, we bought his very first Indians jersey for the occasion — which he wanted to model with Tyler! 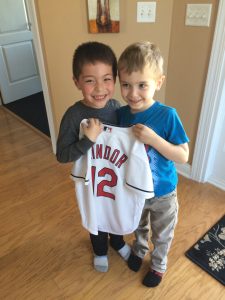 On April 24th Alan and I practiced finding all 9 positions on a baseball field diagram.  We also reviewed throughout the week.

On April 30th Alan’s big day went off without a hitch.  It was warm and sunny at game time, despite a forecast calling for isolated thunderstorms.  It had also rained for most of the previous two days.  Alan’s cheering section saved the day, since I was not positioned as close to Alan as I thought I would be.

On May 1st I received the following email reply from Chris Antonetti, after having sent him a scan of Alan’s letter & artwork and a recent photo:

“Thanks for the note, the letter from Alan, and the picture.  It’s cool to see Alan sporting his Tribe gear and be so engaged with the team.  I hope Alan enjoyed the Kids Starting Lineup experience yesterday.  All the best, Chris”

On May 2nd Mrs. Feldman shared the photo of Alan running the bases with Alan’s kindergarten class!  When I asked Alan how he felt about that, he smiled and commented “the whole class was looking at me!”  I asked if that made him proud and he said “yes.”  We also joked together that Alan must’ve left a cloud of dust behind him because it looks like he’s running so fast (Alan loves when we say that). 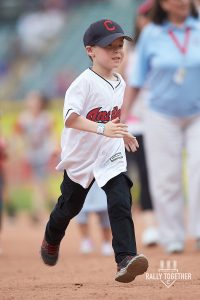 -Alan received two complimentary tickets for the game, which he and I used to enter.

-Alan found out he was assigned to 3B and Jose Ramirez upon arriving at the Terrace Club (the designated meeting area).  Alan was very excited to be assigned to 3B because it was a position he had played during spring baseball.  He told me that 3B was the position he was hoping he’d get.

-Parents had to leave the field a little early (before the kids) so Tomlin could start his warm-up pitches on the mound. The Indians’ field team thought we were at risk of being hit by an errant throw.  However, just before the National Anthem, Robinson Cano and Kyle Seager played catch right next to us.

-When I asked Alan to share how he felt about the Kids Starting Lineup experience overall, he said he was both nervous and excited.  And, oh yeah, he’d like to do it again sometime.  🙂