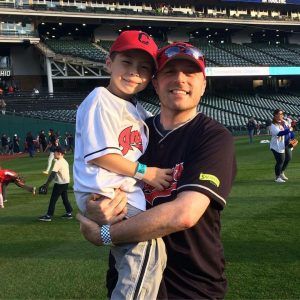 The magical season for Alan and the Indians came to a close today in style, with yet another win on a beautiful day for baseball.  Alan concluded his perfect regular season at Progressive Field at a sparkling 8-0!

On our way to the ballpark we walked with many Browns fans, who opted for the Browns-Tribe doubleheader.  The walk was also highlighted for Alan by seeing and hearing a firetruck go down Superior.  As the sound of the siren echoed off the buildings, Alan remarked that he’d for sure have to tell Xavier about it tomorrow at school (Xavier’s a big fan of firetrucks).

At the ballpark, Alan checked in at the Tribe Town MVP table and headed for the nearby souvenirs to buy an Indians fidget spinner (he’s got a Cavs one too — four in all that he has in his backpack to share with friends).

We then entered the Kids Clubhouse, where Alan got a beach ball from the Cleveland Clinic Children’s table that we played with. 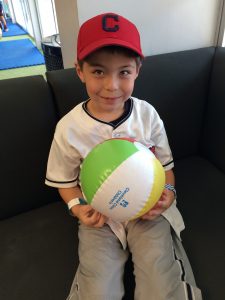 He also spent time on the big glove and baseball bat-balance beam – his favorite climbing and jumping activities within the Kids Clubhouse in 2017. 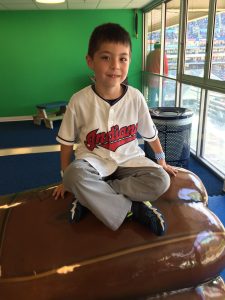 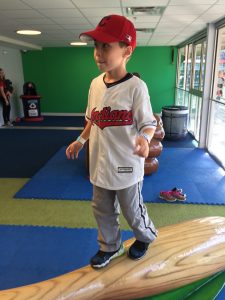 On the way out, Alan took a picture at the Kids Clubhouse lockers, showing off his 2017 Tribe Town MVP badge. 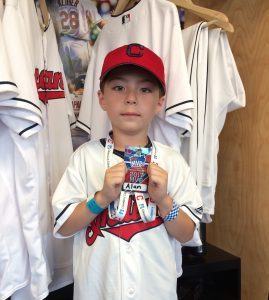 Next up we went down to The Corner so Alan could see the Indians’ mini team balls on display.  Alan was glad to see Ramirez and Lindor, and he accurately identified the Francona ball. 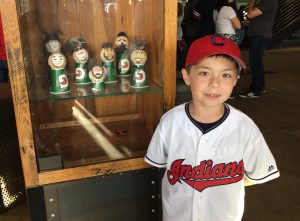 Then we returned to the family deck I got Alan some popcorn while he ran the simulated race.  He set a new personal best time of 6.60 seconds!

Alan ate his popcorn while we watched the bottom of the 8th from seats in the lower deck between home and first.  An usher actually offered us to enter his section and sit in two empty seats – first time I’ve ever had that happen. 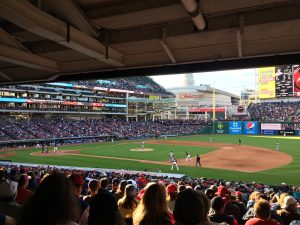 We watched the top of the 9th standing near section 168, where we met with the group set to participate in Catch on the Field (Alan had been selected at random, we think, from the list of Tribe Town MVPs.  We were originally selected for Sept 17th, but that was rescheduled for today due to the Indians clinching that weekend.  We had tickets for both dates anyway).

We helped salute the Indians as they walked off the field after celebrating the win.  Alan enjoyed watching the high five line in person.  He’s stayed up to see it on TV on Friday nights, but had never seen it in person on a Sunday, since we’re normally under the stadium waiting to run the bases). 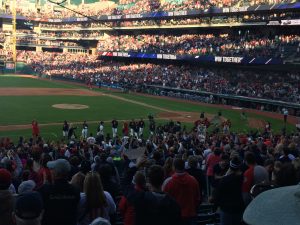 After the Indians left the field, our most fun began.  We entered the field down the third base line and walked across the warning track all the way to right field.  On the walk there, Alan commented that he was passing the scoreboard where they showed the flames he saw when Andrew Miller entered the game in the 8th inning.

When we got out to right field, the Indians handed us a specially-marked, soft core baseball to play catch with.  And play catch we did.  We had a blast throwing the ball around.  Alan and I took selfies and also had an Indians employee take our picture (shown at the beginning of the post). 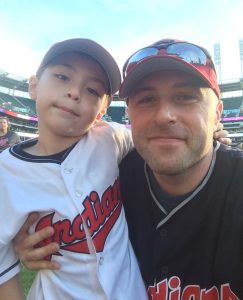 We also wrote Alan’s name in the warning track dirt.  After all it’s Alan’s ballpark; the Indians just play in it! 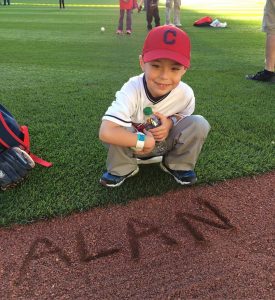 We’re sad to see the regular season end, but hopefully Alan can at least get back during October for another playoff watch party.  In the meantime, how’s this for an impressive season in review, for both Alan and the Indians:

Alan finished the season with a perfect 8-0 record.  It started with his MLB debut in the Kids Starting Lineup in April and ended with Catch on the Field in October.  In between, there were personal bests set all throughout the family deck.

Meanwhile the Indians won 22 games in a row on the way to 102 overall, won the AL Central by 17 games, led MLB in ERA, had five all-stars – including two MVP candidates in Ramirez and Lindor and the likely AL Cy Young winner in Kluber…and the list goes on!