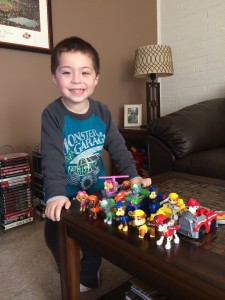 The biggest fan of Nick Jr.’s “Paw Patrol” now owns all 6 pup characters–including their badges–and couldn’t be happier.  Marshall (red), Chase (blue), & Rubble (yellow) were easy to find in stores; Zuma (orange) was a little tougher.  Rocky (green) & Skye (pink) were impossible to find, so we bought them on eBay.

The last two days Alan learned that the mail only comes once per day, and it can feel like forever to wait for that time.  But he managed, and yesterday he was overjoyed to open up the mailbox and see Skye!  He even used his new cutting skills to open up the package.

Alan lined up the characters on the coffee table according to the order in which they appear during the show’s into.  He loves to look at them while he sings along with the show’s theme song (He remembers most of the words). 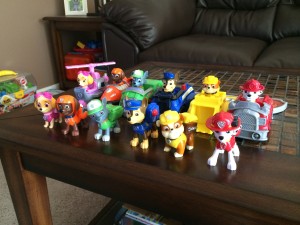