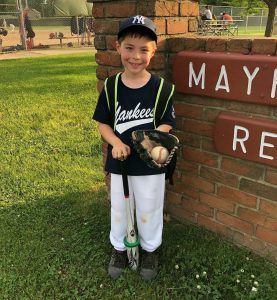 Alan had his best game of the season tonight in front of Grandma Debbie, Papa, Tyler, and Carleigh.  Alan earned his first career game ball and helped lead the Yankees to a win over the Giants!

At the plate, Alan singled in his first at-bat.  In his second at bat, he drove in 2 runs on an RBI ground out.  In his third at bat, he singled and would later come around to score.  Alan was so locked in that he only saw 3 pitches over his 3 plate appearances.  I coached first base for the first time this season (after being at third for all other games) and congratulated Alan each time. 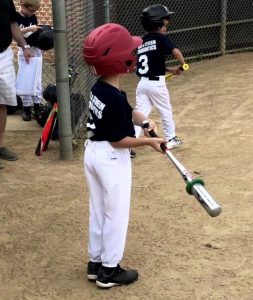 Defensively, Alan caught three innings (on a very hot night) and played one more in LF.  No one on the team enjoys putting on the equipment and catching right now more than Alan. 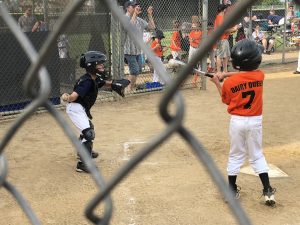 After the game, Alan and Xavier were each presented with game balls.  The ump originally gave the balls to me following the last out.  When I handed them to our coach, he was consulting with the stat-keeper on the most deserving recipients.  I heard him say Alan, so I had my phone ready to record the video of Alan receiving the game ball.  Alan had been wanting so bad to receive a game ball and tonight he got his wish.  Both he and Xavier really deserved it tonight.

Afterwards Tyler and Carleigh greeted Alan with a big hug.  Alan proudly showed them the game ball, then showed Grandma and Papa too.  It was a very special night for Alan and he was thrilled to share it with his family! 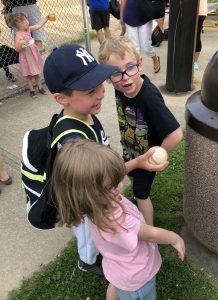 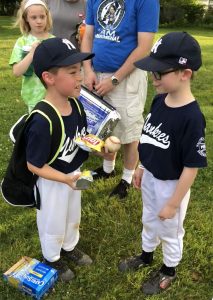 At home Alan asked if he can have a case for his game ball, and I agreed.  We’ll be displaying that ball for sure!