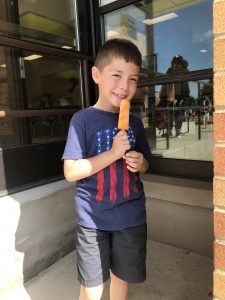 Today Alan prepared for 2nd grade at the 2nd annual “Popsicles with the Principal.”  Alan played on the playground and had two [orange] popsicles.  He also met Mrs. Harris and dropped off his school supplies at his desk.  He’s ready for 2nd grade, which starts tomorrow!

Alan also visited with Mrs. Russo.  According to Mrs. Russo, she said Alan and Brady were put in the same class this year because they’re best friends and behave well when together.  That was the second time she gave inside information about teacher assignments.  During Alan’s parent-teacher conference last October, she said she specifically wanted Alan in her class based on his reputation from Kindergarten.