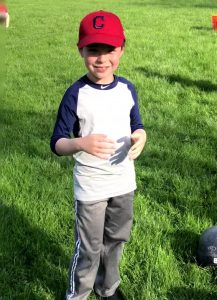 Alan met his teammates on April 22nd and was thrilled to discover De’Onta is on his team!  Then tonight the boys had their first organized practice.  After a seemingly endless string of rained-out practices, it was great to see the sun again and hear the ping of Alan’s bat!

This year Alan is playing in the Highland Heights Mighty Mite League after transferring over from the Mayfield League.  Xavier made the switch with Alan, and they’ll reunite with other Millridge kids in the league, including Grady, Noah, De’Onta, and others.

Alan’s team this year will be the Marlins.  Play ball!