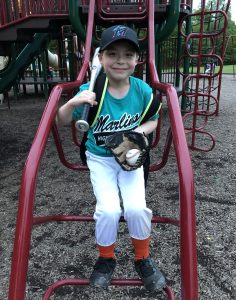 At the plate, Alan provided a spark for the Marlins, going 2-for-2 with 1 RBI and 1 run scored.  In his second at-bat, he recorded the first double of his career on an RBI hit down the left field line! (pictured below).  The clutch performance earned Alan the game ball! 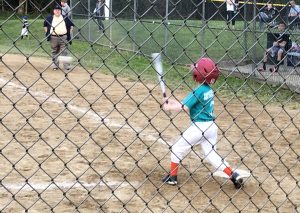 Alan was presented with the game ball during a meeting on the bench.  He later said he was not expecting to be the first recipient, but he’ll gladly take the honor.  The Cardinals may have defeated the Marlins, but it was definitely an Opening Night to remember.  We were both incredibly proud of Alan’s performance! 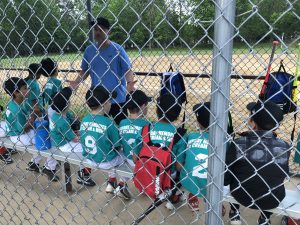 Note:  This year I’m the bench coach.  I’ll be keeping score for the Marlins at-bats in a scorebook, even though the games are considered exhibitions until the playoffs start in July.

5/25/19 update: Alan showed off the game ball to Tata, Papa, Robbie, Jill, Debbie, Papa, Bobby, Tyler, and Carleigh today as the ball came along with us on our Saturday stops.