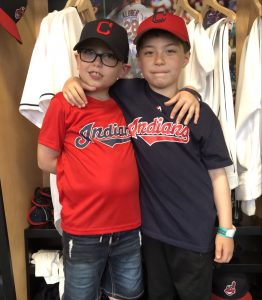 Today Tyler joined us at the ballpark for the first time this year and second time ever.  It was a rainy day downtown, but a little rain wasn’t going to stop these two from having fun together.

We arrived at the ballpark early and walked Tyler down for a field level view.  We also introduced him to Jim Thome. 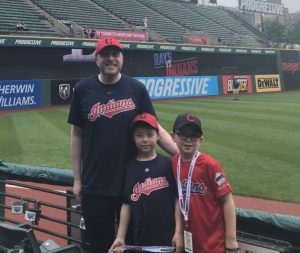 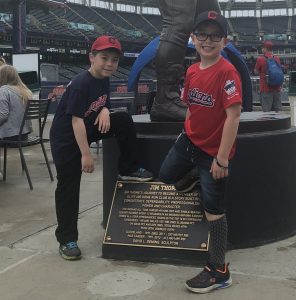 Up in the Kids Clubhouse, the boys played on the slide and took a joint photo impersonating big leaguers.  Tyler also tried out the “Hot Corner” game (Alan can be heard in the background providing assistance).  Tyler played this game repeatedly until he reached the “Pro” level! 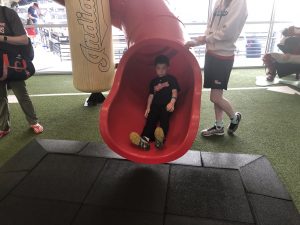 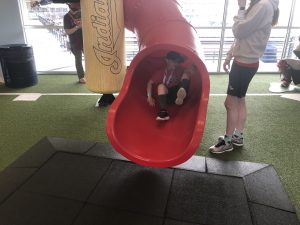 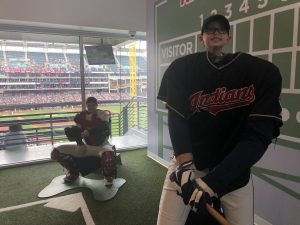 Out on the Family Deck, the kids tried to top their personal bests at each event.  Both set personal records for highest pitch speed (Alan – 28 MPH, Tyler – 24 MPH).  Alan set a new record in the sprint, recording a run of 5.68 seconds, and Tyler ran a great race too.  Tyler also drove in Alan at Little League Park! 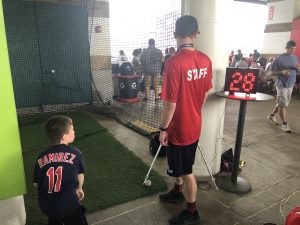 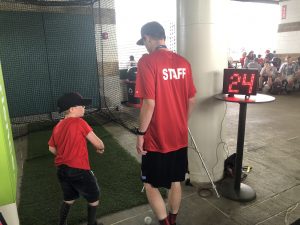 When it came time for souvenirs, Alan opted for an Indians Lego set and Tyler went with a Father’s Day edition Indians hat.  Though the Indians didn’t win the game today, they did give Alan and Tyler something to cheer about with three runs in the 8th and 9th, which they watched from back inside the Kids Clubhouse.  After the game, we got ice cream to cap off a busy 24 hours for the boys.

Last night they went to the Chagrin Falls Blossom Time Festival together and had a sleepover at Grandma Debbie’s.  The carnival excitement, highlighted by riding the big Ferris Wheel, helped them fall asleep by 11 last night.  That gave them just enough energy for a full 5-hour day at the ballpark.