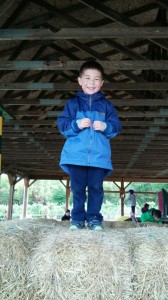 Lately Alan has really been impressing me with his maturity. He’s always been a good-mannered and well-behaved kid, but now he seems even more grown-up.

Within the last month, he’s asked to donate some of his old toys to kids who don’t have what he does.  He also  fully accepted that Ruby went to Dog Heaven so she didn’t have to be sick anymore.  And he’s done very well at his piano lessons.

He had already been a good Chinese-English translator, but he’s continuing to develop his language skills too.  He has even picked up sign language from his class at school.

He doesn’t fall asleep in his car seat as much anymore.  And speaking of car seats, he’s at a weight where he can transition to a booster seat now.

He thinks about more complicated subjects, such as where babies come from (He currently believes parents go to the hospital to pick out their favorite babies from a nursery…and that I picked him because he’s my favorite).

He likes wearing white undershirts so he can dress more like a grown-up.  He’s always told me we look the same except for our hair length and our clothes, but now even that gap is narrowing. 🙂