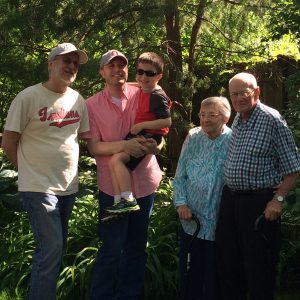 Here’s the rundown of Alan’s first trip to Chicago to visit Robbie and Jill!

10:30AM – 6:30PM (EST):  Car ride to Deerfield.  Alan was great the whole way!  He listened quietly to his favorite transportation CD and slept for about an hour.  We attributed his good behavior to being excited to see Robbie and Jill!

PM: Papa, Tata, Robbie, and I went to dinner at Il Forno Pizza while Alan stayed back at the house and played with Lincoln Logs with Jill.  Afterwards we all watched the Cavaliers clinch the Eastern Conference in Toronto!

Note: That wasn’t even the only clincher we saw on TV during the trip.  We also watched OSU baseball off and on all weekend, including the final outs of the big ten tournament championship win over Iowa on Sunday.

AM:  As soon as Alan woke up on Saturday, he and I put together a Lego garbage truck that Alan received as a surprise gift from Robbie and Jill.  Then all of us went to the Chicago Botanic Garden [for the highlight of Alan’s trip] to see the model train exhibit at the railroad garden!  Alan absolutely loved it.  His favorite train car was the orange butterfly train car (pictured below).  He borrowed my phone to take his own pictures and videos.  Alan could’ve stayed there all day! 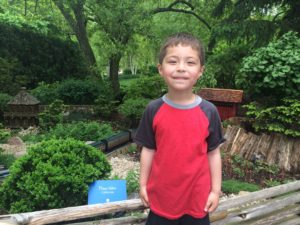 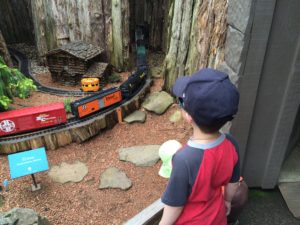 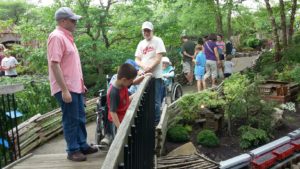 Note:  Alan volunteered to push Tata’s wheel chair at the garden.  We were all surprised that he was strong enough for the task, but he definitely was able to do it.  Because he was so good, he got to pick out two toy trains and a train book (pictured further on) from the gift shop.  🙂

PM:  Afterwards we had lunch at Sweet Tomatoes, one of our favorite lunch destinations.  Then Alan visited the Deerfield Public Library, where he played with more trains and met another 5-year old named William.  In the evening Alan put together puzzles with Tata and played Chutes and Ladders with Jill.  We also took our annual family photo in the backyard by the famous tree that Papa got at Beachwood Place in the mid-1990s and gave to Robbie and Jill to plant.  Just 1-2 feet tall back then, the tree has now grown to an estimated 15-20 feet now. 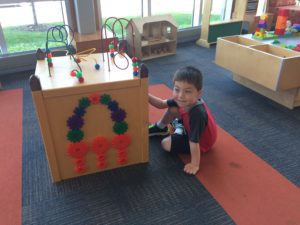 AM:  The day started with Alan’s first of three different trips community playgrounds, where we discovered that Alan has an interest in rock climbing.  He was actually quite good at it and before long he mastered climbing the wall pictured below! 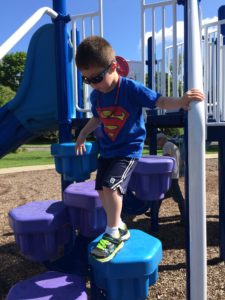 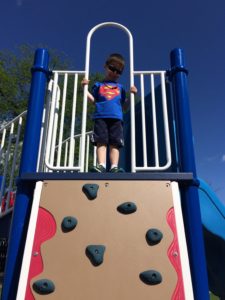 PM:  Prior to having lunch at Rhapsody, another favorite of ours, Alan made his professional mini golf debut at the Highland Park Country Club.  He began by earning a par on his first hole. Shortly after, on just his fourth career hole, Alan achieved his first career hole-in-one!  With everyone watching attentively – including Papa and Tata – he banked in a downhill putt off the back wall for an eagle on the par 3 fourth hole.  As the ball inched its way to the cup, it seemed to go in slow motion.  But it dropped in, and we erupted in cheers.  Alan didn’t initially understand what he accomplished, but after we let him know the significance, he became quite proud.  The scorecard – subsequently signed by each of the four participants in the day’s round – is now on display in a plastic holder in Alan’s room.  I circled and traced over the “1” in red marker to highlight Alan’s remarkable feat (pictured below).

If that wasn’t enough excitement for the day, Alan also rode a commuter train in the direction of the city for 3 stops.  Robbie and I dropped off Alan and Jill at the closest train stop, then drove down the line to pick them up after an 11-minute ride.  Alan was given a souvenir ticket (pictured below) from the ticket-taker to commemorate his first ride! 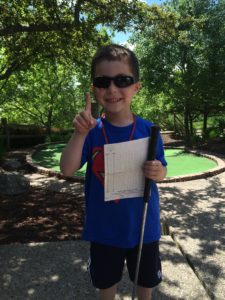 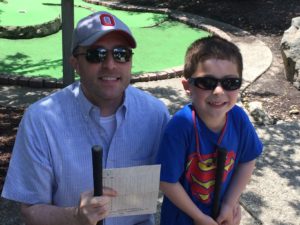 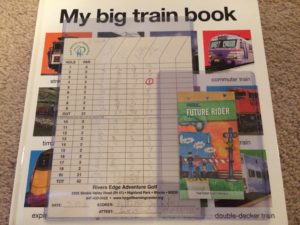 AM:  Alan woke up and played his favorite construction equipment “rescue game” with Robbie while everyone packed.  Then Alan got to play at two more playgrounds near Robbie and Jill’s house!  It was a very hot morning, but Alan also ran the bases on a nearby baseball diamond. 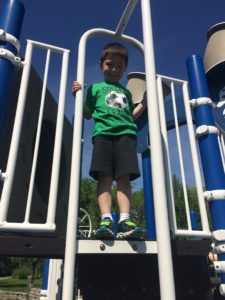 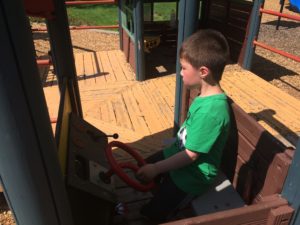 12:30-8:30PM (EST):  Car ride to Mayfield Heights.  Again Alan was very well-behaved.  He ate a lot of graham crackers and slept for about 90 minutes.  He also played a race car arcade game at a rest stop for the first time.  He loved it! 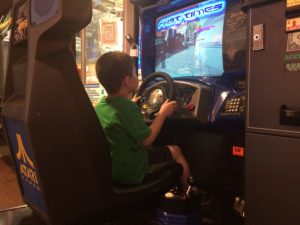 Alan had so much fun that he’s already declared that we’re returning on June 10th.  🙂  Thanks to Robbie and Jill for hosting us!